THE ZODIAC OF TIME: GLASTONBURY’S ENIGMATIC TOR –FROM PREHISTORIC ORIGINS TO LONDON’S OPENING CEREMONIES FOR THE 2012 OLYMPICS

About a year ago, I posted a blog about one of my most favorite places in England, Glastonbury Abbey, the site of Britain’s earliest devotion to Christianity.  In that blog I mentioned Glastonbury’s famous Tor only in passing.  The truth is that in reality, this ‘hill’ (for the translation of ‘tor’ is hill) deserves so much more as witnessed by the fact that Danny Boyle, producer for the opening ceremonies of the summer Olympics, chose it as a very graphic focal point.

Reaching back into ancient times, the myths surrounding the Tor are extensive in scope.  From a small guide produced by the Gothic Image, THE bookstore in Glastonbury, we’re told that the Tor has been called, “a magic mountain, the fairies’ glass mountain, a spiral castle, a Grail castle, the Land of the Dead, Hades, a Druid initiation center, an Arthurian hill-fort, a magnetic power-point, a ley-line crossroads, a center for Great Goddess fertility rituals and celebrations, and a converging-point for flying saucers.”

Scientific proof of several of these myths eludes…although it has been established that the Tor is a ley-line crossroad.  As for other suggestions, what I can say is that having climbed the Tor on several occasions over the years, there is something very other worldly about its energy and atmosphere…time and space seem to inexplicably dissolve.  My mentor in evolutionary astrology, Steven Forrest, would no doubt say, it’s  positively ‘Neptunian’!

Rising 518 feet through the (often) misty landscape, the Tor suddenly manifests in the distance as you round an eastbound curve on the A361 outside of Glastonbury…not unlike the sudden appearance of Stonehenge, which stands starkly isolated on the Salisbury Plain.  And like Stonehenge, once you see it, it’s difficult to keep your eyes on the road.

Among more recent speculations regarding the Tor are those ascribed to a British artist, Katharine Maltwood.  In 1935 Maltwood announced her aerial discovery of a ‘vast terrestrial Zodiac’ revealed through the topography of the Tor and surrounding countryside.  While her claims of zodiacal connections are abstract within the framework of what we think of as the traditional Zodiac, there is evidence that Maltwood had company in making such claims by Queen Elizabeth I’s celebrated astrologer, Dr. John Dee.

So much has been written about this landmark that even if you never have the opportunity to visit it physically, you can read and let your mind cross the barriers of reality which is exactly why I chose it to play a significant part in my book, “A Conspiracy of Ravens” the second of historical mysteries in my “Flight Through Time” series, currently in production.

As for the closing ceremonies of the Olympics; I wouldn’t be surprised to find that we haven’t seen the last of Glastonbury’s Tor. 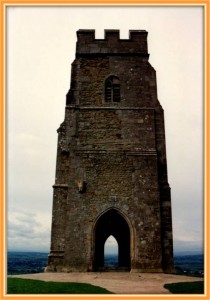