WAS THE SAINTED HUGH OF LINCOLN CATHEDRAL REALLY SO ‘SAINTLY’?

If one could board the ‘way back machine’ with Mr. Peabody and Sherman from the endearing ‘Rocky and Bullwinkle’ show, it might be interesting to dial in coordinates for May 1186, Eynsham Abbey, Oxfordshire.  Upon arrival, we might very well hear the town crier announcing,

INTO BISHOP’S CHAIR AT LINCOLN CATHEDRAL!!

It was to Eynsham that King Henry II summoned a council of bishops and barons in order to elect Hugh of Avalon to the vacancy at Lincoln.  No question, by this time in his life, Hugh had amassed a very impressive resume of accomplishments and on the surface it would seem that he was well placed in the monastic life.    Following his appointment as a deacon for the Benedictine priory of Villard Benoît near Grenoble France, Hugh’s ecclesiastical career was on the proverbial meteoric rise by the age of 19, particularly after he came to the attention of the powerful Plantagenet king, Henry II.

As it was, in 1170 Henry found himself in a hot spot of bother with the Pope over that nasty business concerning Thomas Becket.  However, Henry being the quintessential deal maker, managed to appease Pope Innocent III (an ‘interesting name’ in and of itself!) by making an offer that Innocent couldn’t refuse.  In lieu of going on pilgrimage as part of his penance for his complicity in Becket’s murder, Henry agreed to establish a Carthusian house in England; which he did, just down the road (more or less) from Glastonbury Abbey in Somerset.

Unfortunately by 1179, the Witham Charterhouse was pretty much of a mess; so who to call?  By this time Hugh, now quite accomplished in his mid forties, was on Henry’s radar and thus, was commanded to Witham to sort things out… which he did…brilliantly actually.  As there is nothing like success, Hugh’s accomplishments at Witham led him to an additional assignment on the King’s orders.

By 1183 the political climate had become so poisonous at Glastonbury that Henry ordered Hugh to take on the supervision of Glastonbury’s diabolical ‘Custodian’, Peter D’Marcy.  Predictably, D’Marcy didn’t take kindly to Hugh’s interference which provides rich fodder for my book, A Murder of Crows.  However, following Glastonbury’s disastrous Great Fire of 1184, Hugh remained at Witham until the Eynsham council elected him to head Lincoln’s bishopric in 1186.

Hugh’s biography, written by Adam of Eynsham, a Benedictine monk who was Hugh’s constant companion during Hugh’s final three years of life, remains in manuscript form in Oxford’s Bodleian Library.  Predictably, Adam’s accounts of Hugh’s life and behavior is impeccable.

However… in his contemporary and highly entertaining book, Sex Lives of the Popes, author Nigel Cawthorne informs us:

“Like other popes, Alexander III [1159-1181] had particular problems with the clergy in England.  Determined to have someone celibate in the See of Canterbury, he appointed the monk Clarembald, only to discover the he had seventeen illegitimate children in one village alone.

At the that time, the Bishop of Lincoln [this would be Hugh] was concerned about the debauchery of nuns in England.  So he developed a novel test to see if they were living up to their vows of chastity.  He would go through the convents fondling the nuns’ breasts to see how they would react.”

Nevertheless,  Hugh of Lincoln is the most venerated saint in Great Britain today after Thomas Becket!

A Murder of Crows is book one in my historical mystery series, Flight Through Time, which is in production. 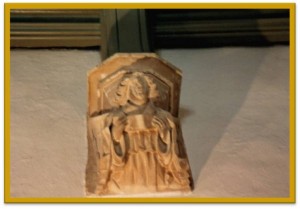