As I write this post, I’m currently ensconced in one of my favorite English cities, Oxford, where tomorrow I’ll be tramping around what remains of Godstow Nunnery just outside of the city and the setting for book #3 in my ‘Flight Through Time’ historical mystery series.  While I’m looking forward to this, two days ago I had an extraordinary experience at Winchester Cathedral.

Through connections to the Cathedral, an old friend of mine was able to arrange an opportunity for me to spend some time with one of the Cathedral’s curators who allowed me to privately view the 12th century ‘Sparsholt Chalice and Paten’, on loan to the Cathedral, but not on display.

We tend to fantasize that such ecclesiastical trappings were always very ornate, made from the most valuable of metals such gold or silver, decorated with priceless gems.  The reality is that in fact, often they were not.

During a Victorian renovation of Sparsholt’s church which is located about three miles from Winchester and believed to be a site of worship since Saxon times, the chalk grave of a 12th century priest was discovered near the pulpit;  buried with him were a ceremonial pewter chalice and paten.

What surprised me the most was not only its lack of ornamentation and utter simplicity, but the size!  A visual guess puts the chalice at roughly four inches tall with the bowl perhaps six inches in diameter.  The paten is perhaps four inches in diameter.  With the exception of the medieval Christian cross embossed in the center of the paten, both pieces are totally devoid of decoration and although Pewter was considered a valuable metal, it certainly wasn’t in the category of gold and silver.  During a recent conservation restoration, the decision was made not to attempt to repair the crack in the bowl.  Nevertheless, to contemplate something so old in front of you, wondering who might have used it 900 years ago, staggers the mind.

We also forget that the average height of the medieval body was much shorter than modern physical characteristics, so one wonders; even though the pieces were ceremonial, were they proportionally fashioned?

Unfortunately, but understandably, I wasn’t allowed to hold them, but nevertheless it was an extraordinary experience, knowing that characters in my books have been taking the sacraments from items such as these. 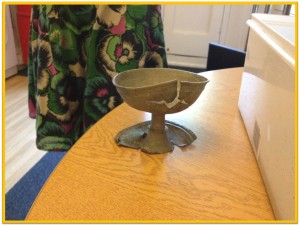 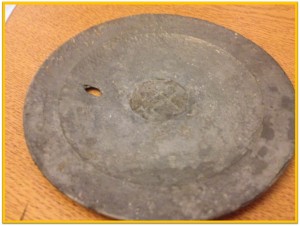