Recalling one of my previous posts (https://gayemack.com/2012/08/29/early-graffiti-artistsbored-medieval-monks-and-nuns), ‘illuminating’ the practice of making marginal editorial remarks by restless and bone weary monks beavering away in the Scriptorium, it’s difficult to get one’s mind wrapped around the fact that the complete text of this bible was with a few exceptions, written by a single scribe!   However, whomever this scribe was, he actually was part of what we might term today, a ‘production team’, for his carefully written words needed the prepared parchment,  prepared ink, writing tools, colorful illumination and applied gold…techniques each requiring the specialized skills of various artisans.

Although the text itself was finished, it’s believed that the production of the artistry, the illuminations, added an additional span of possibly 15 years or more and at that, this was never finished.   Some 900 years later, there remains no conclusive evidence as to whom actually commissioned the Winchester Bible, although it’s highly thought that it might have been Henry of Blois who was Winchester’s Bishop in 1160 corresponding to the dating of the Bible’s layout and script.  Henry was quite the world traveler for his day and a builder.  After he left the great monastery of Cluny in France where he was brought up, Henry I of England placed him as Abbot of Glastonbury where he undertook a massive building program of this phenomenal abbey until his death in 1171. https://gayemack.com/2011/08/10/glastonbury-once-englands-wealthiest-abbey-remains-powerfully-mystical-800-after-the-great-fire-of-1184 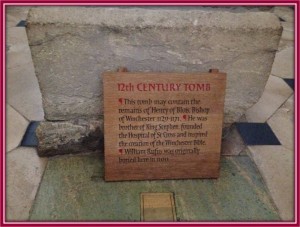 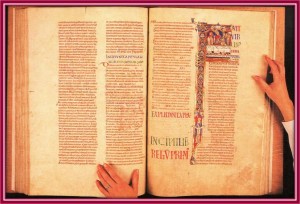