THE BEGINNING OF THE END FOR HENRY II & THOMAS BECKET~JANUARY 30, 1164

By January 30 1164, King Henry II of England  had evidently had enough of the ecclesiastical hierarchy protecting its own in criminal matters.  In an effort to curb the power of the Church’s courts, Henry laid down a document of sixteen articles known as the Constitutions of Clarendon.  Initially Henry’s Archbishop, Thomas Beckett and the bishops of the realm reluctantly agreed to observe the guidelines of Henry’s document including the article stating that if a member of the church committed a crime, they would be tried in the state court in addition to an ecclesiastical court.  This was particularly relevant to the exposure of priests charged with serious felonies having to answer to a secular court and punishment.

So restrictive were Henry’s articles through the eyes of the clergy, particularly in matters of such crimes as well as  property and excommunication, that although Becket agreed to the articles as we might say today, ‘in principle’, he refused to sign the order.   On October 8, 1164 Henry ordered Becket to appear before a great council at Northampton Castle to answer charges of ‘contempt of royal authority and malfeasance in the Chancellor’s office’ of which Becket was convicted.

Becket bolted, fleeing to the continent where he was protected by King Louis VII of France.  For six years Henry attempted to bring his archbishop to heel through various power plays of repercussion countered by Becket’s threats of excommunication against the king, bishops and the kingdom.    Finally in 1170 Pope Alexander III brokered a diplomatic compromise that allowed Becket to return from England; however, the peace between Archbishop and King did not last and on December 29, 1170 Becket was assassinated by four of Henry’s knights who misunderstood (or did they?) the King’s cry, “Who will rid me of this meddlesome priest!”

A selection of the articles making up the Constitutions of Clarendon is as follows, noting that article three was particularly grievous to Becket and his fellow clergymen.

3. Clerks charged and accused of any matter, summoned by the king’s justice, shall come into his court to answer there to whatever it shall seem to the king’s court should be answered there; and in the church court to what it seems should be answered there; however the king’s justice shall send into the court of holy Church for the purpose of seeing how the matter shall be treated there. And if the clerk be convicted or confess, the church ought not to protect him further.

4. It is not permitted the archbishops, bishops, and priests of the kingdom to leave the kingdom without the lord king’s permission. And if they do leave they are to give security, if the lord king pleases, that they will seek no evil or damage to king or kingdom in going, in making their stay, or in returning.

6. Laymen ought not to be accused save by dependable and lawful accusers and witnesses in the presence of the bishop, yet so that the archdeacon lose not his right or anything which he ought to have thence. And if there should be those who are deemed culpable, but whom no one wishes or dares to accuse, the sheriff, upon the bishop’s request, shall cause twelve lawful men of the neighborhood or the vill to take oath before the bishop that they will show the truth of the matter according to their conscience.

8. As to appeals which may arise, they should pass from the archdeacon to the bishop, and from the bishop to the archbishop. And if the archbishop fail in furnishing justice, the matter should come to the lord king at the last, that at his command the litigation be concluded in the archbishop’s court; and so because it should not pass further without the lord king’s consent.

14. Chattels which have been forfeited to the king are not to be held in churches or cemeteries against the king’s justice, because they belong to the king whether they be found inside churches or outside. 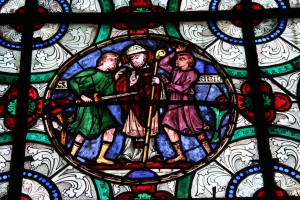