Was St. Patrick ever at Glastonbury Abbey in the early 5th Century?  Legend says he was but then, as is the case of many of ancient stories, we’ll never know for sure.  There is however, a document known as the Charter of St. Patrick believed to have been written by Glastonbury monks in the late 13th century.  The exact purpose isn’t clear, but it does purportedly narrate in his own words,  the account of Patrick’s arrival at Glastonbury in 430 A.D.  Clearly the gap in time makes the authenticity of the Charter’s narrative  suspect and begs the question, why would the  monks produce such a document 900 years after the fact?  One explanation could be that it was a PR stunt.

Leading up to the catastrophic fire of 1184 which took Britain’s wealthiest abbey to ground, Glastonbury was in a state of political chaos, the circumstances which I write about in my historical mystery, ‘A Conspiracy of Ravens’(represented by Peter Miller-unpublished).  However, despite King Henry II’s support in the abbey’s rebuilding immediately following the fire, down the road the monks needed to sustain pilgrim traffic in order to keep the coffers topped up.

Along with the Arthurian legends which include the re-internment of Arthur and Guinevere at the foot of a black marble high altar during the state visit of Edward I and Eleanor of Castile in 1278,  it didn’t hurt to add St. Patrick into the mix.  Nevertheless, whether legend, myth or fact, allegedly St. Patrick’s bones are believed to have been buried under the floor of the small chapel shrine that bears his name and stands among Glastonbury’s remains–a claim the Irish understandably, strongly contest.

The Charter of St. Patrick(excerpt)

In the name of our Lord Jesus Christ. I Patrick, the humble servant of God, in the year of His Incarnation 430, was sent into Ireland by the most holy Pope Celestine, and by God’s grace converted the Irish to the way of truth; and, when I had established them in the Catholic faith, at length I returned to Britain, and, as I believe, by the guidance of God, who is the life and the way, I chanced upon the isle of Ynsgytrin, wherein I found a place holy and ancient, chosen and sanctified by God in honour of Mary the pure Virgin, the Mother of God: and there I found certain brethren imbued with the rudiments of the Catholic faith, and of pious conversation, who were successors of the disciples of St Phagan and St Deruvian, whose names for the merit of their lives I verily believe are written in heaven: and because the righteous shall be in everlasting remembrance, since tenderly I loved those brethren, I have thought good to record their names in this my writing.

And they are these: Brumban, Hyregaan, Brenwal, Wencreth, Bamtonmeweng, Adelwalred, Lothor, Wellias, Breden, Swelwes, Hin Loernius, and another Hin. These men, being of noble birth and wishing to crown their nobleness with deeds of faith, had chosen to lead a bermit’s life ; and when I found them meek and gentle, I chose to be in low estate with them, rather than to dwell in kings’ palaces. And since we were all of one heart and one mind, we chose to dwell together, and eat and drink in common, and sleep in the same house.

And so they set me, though unwilling, at their head: for indeed I was not worthy to unloose the latchet of their shoes. And, when we were thus leading the monastic life according to the pattern of the approved fathers, the brothers showed me writings of St Phagan and St Deruvian, wherein it was contained that twelve disciples of St Philip and St James had built that Old Church in honour of our Patroness aforesaid, instructed thereto by the blessed archangel Gabriel. 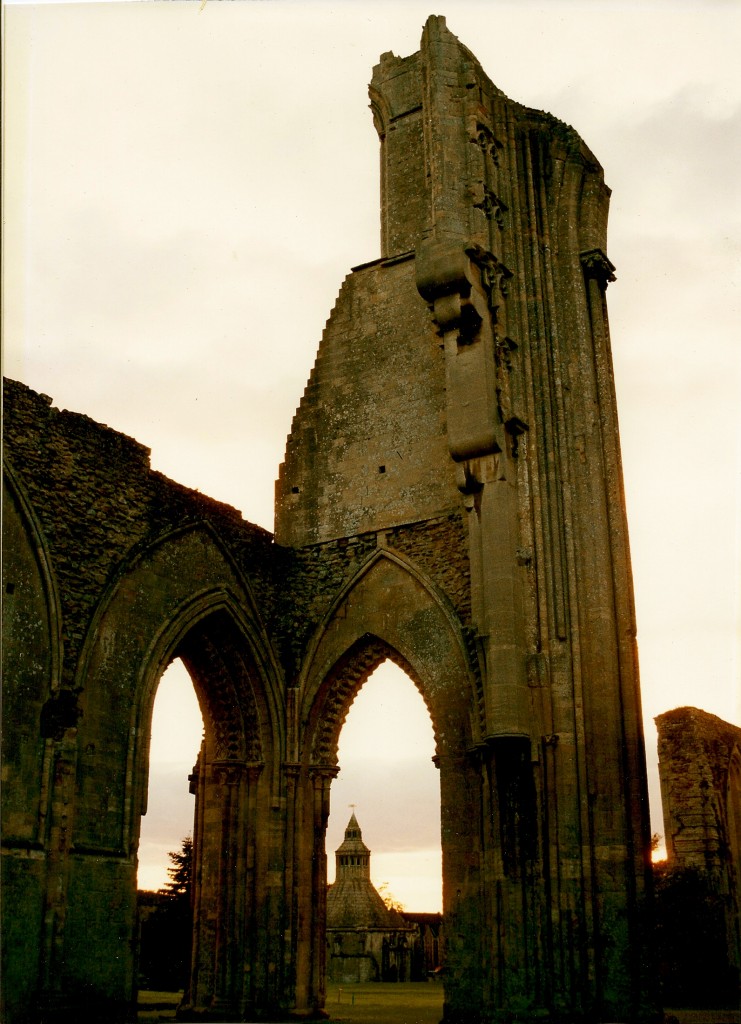