A recent article by Edward Snow sheds an ‘interesting’ light upon the high, spiritual value in which astrologers were held by medieval Rome.  Sadly however, ignorance, fear and religious control issues proved to be the death knell for this sacred science. Fortunately  in more recent times, wiser perspectives are bringing legitimate astrology to forefront again.  Through the lenses of evolutionary, cartographical,  financial and medical astrology for example, outmoded, fear-mongering myths are finally being relegated to the dungeon.   Snow’s article is certainly ‘worth the read!’

When the Holy Father and other sixteenth century leaders of the Roman Catholic Church sat down to plan construction of Saint Peter’s Basilica in Rome the first person they reached out to was not Michelangelo or any of the other architects or designers who worked on the project.

“Saint Peter’s Basilica is considered by many to be an enduring affirmation of a centuries old theology and a grand example of Renaissance architecture. Astrology may not come to mind immediately for the millions of visitors who take in the spectacle of the awe-inspiring building each year, but construction of the church was in fact begun on a certain date and at a precise time chosen for its astrological significance,” says Mary Quinlan-McGrath, a professor of art history at Northern Illinois University (NIU) and author of Influences: Art, Optics and Astrology in the Italian Renaissance.

“The locations on the horoscope chart of the Sun, Venus and Mercury indicated benevolence while that of Saturn and Mars suggested power and longevity.  Jupiter’s location was propitious as well, promising wealth,” she observed.

Quinlan-McGrath says Pope Julius II and his Renaissance architects believed that “the concordance of the heavens and the radiation emanating from the cosmos provided protection for the building at the time of its founding and, in turn, the building would continue to radiate these powers upon the people associated with it over the centuries.”

In the current era, modern astrologers aren’t likely to go along with the date their medieval counterparts used for the birth of the world.  And the date divined for Christ’s birth is suspect as well.

However, despite these factual stingers, most contemporary astrologers would probably agree that Vatican astrologers did an excellent job of finding an enduring electional chart for the start of construction.

Using modern computers, astrologers can swiftly pull up a birth chart that displays the heavens precisely as they looked on April 18, 1506 at 10 a.m. in Rome.  The planetary alignments on that day were exceptionally harmonious – with one notable exception.

Medieval astrologers used the sun, moon and visible planets in their calculations.  On the Basilica’s electional chart the major stressful aspect is a hard, right-angle alignment between the sun and Saturn, with Saturn dominantly controlling that space on the horoscope wheel astrologers look to for insights on financial matters.

Astrologers in any era would notice that the angular relationship between the sun and the planet associated with hardship and delays (Saturn) would be challenging.  And, in fact, the project was plagued by more than a century of financial woes and construction delays, Quinlan-McGrath points out.

Presumably, Vatican astrologers were mindful of the economic stressors the project was fated to face, but had supreme faith in the positive, long-range outcome promised by the electional map.

In her book, Quinlan-McGrath examines the astrological context of the founding of Saint Peter’s as well as the creation of other works of art and architecture in Rome, such as the Stanza della Segnatura in the Vatican Palace and the lavish Villa Farnesina of Agostino Chigi, an extremely wealthy banker.

She notes that astrological thought permeated the Italian Renaissance.  Scientists used mathematical measurements to chart the heavens and theologians and philosophers harmonized religious doctrine with astrological readings, making Saint Peter’s a product of its time.

“The belief that celestial forces could operate through works of art and architecture was not obscure or magical but in harmony with the philosophical, religious and scientific beliefs of the fifteenth and sixteenth centuries,” she explains. 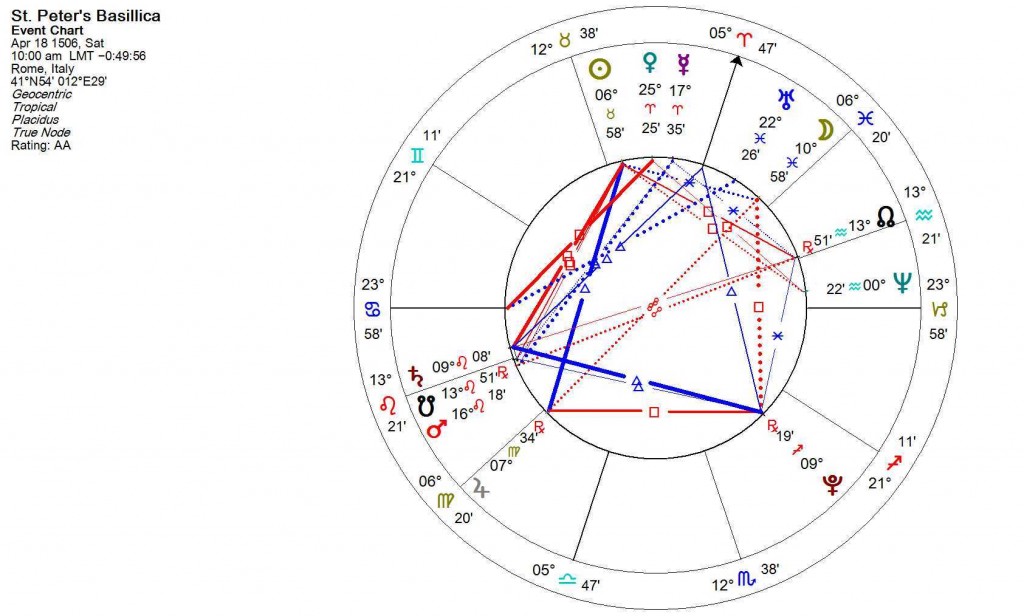