USING ASTROLOGY AS A WRITER’S TOOL FOR ENHANCING CHARACTERS, REAL AND IMAGINED

In my 12th  & 13th century historical thrillers, Eleanor of Aquitaine is the queen of the hour. Certainly she was a fascinating woman– so much so that scholars, historical fiction authors and Hollywood, can’t seem to get enough of her; nor can I.  If someone were to ask, “if you could have dinner with anyone from history, who would you choose?” Hands down it would be Eleanor.

As an evolutionary astrologer working on my 3rd historical fiction book, ‘A Flight of Doves’, I’ve wondered, what does Eleanor’s birth chart look like?’  Searching through various sources has resulted in the disappointing realization that most likely we’ll never know.  Sadly, scholars can’t even agree on the year of Eleanor’s birth and no one of any authority even contemplates a date.  Nevertheless, the thought is an intriguing brain game of speculation.

Eleanor was a woman  who by all accounts, was highly educated and welcomed travel…and travel she did, throughout her lifetime.  Even when her second husband, Henry II,  had her locked up in Salisbury castle for ten years, he’d take her on the road with him or more accurately, back and forth across the Channel.  A well- read woman for her time, her biographers (of which there are many) indicate that she found travel extraordinarily welcome .  Thus, one could suspect that she might have been a fiery Sagittarius or that she had a strong 9th house (long journeys over water, higher philosophy, education). “Exploring the world as your oyster,” would have been a suitable mantra for Eleanor.   Despite the lone and suspect chart I found that places her as a Libra sun, she definitely wasn’t a role model for relationship harmony and integration. These characteristics were simply not strong points in her as evidenced by her mothering skills and commitment in marriage.

In the realm of ‘what if’, it’s apparent that Eleanor liked the kind of drama often ascribed to a Leo sun.  No question, she reveled in it and in her own way,  reveled being on the world stage.  No wall flower was she.  Alison Weir, the highly regarded authority on Eleanor, states that before her incarceration by Henry, Eleanor’s court  was like no other in all of Europe.  She loved and supported the arts.  She had fine clothes and possessions… “gold for plates and goblets…favorite wines from La Rochelle.”  Her decoration was always the latest in fashion including glazed windows, tiled floors and carpets from the orient.  In a phrase this was a woman who was not economical and was all about “how it and she looked.”  Very Leonine characteristics with possibly her Venus in Taurus.

On the other hand, this was a woman who was analytical and calculating .  In all of her efforts to protect land holdings for Richard I, her favorite child, she plotted and schemed with military precision as if she were in a chess game for life against Henry who favored young Henry until his death and then, John.

She plotted with Richard behind the scenes; she plotted with her spies when Henry gave her more freedom around 1180 and on-wards.  Bottom line, Eleanor never gave up plotting against Henry until he died at Chinon in 1189.  Now, one could say this is the shadow of Scorpio…and it would be fair.  However, keeping in mind that the Sun in a chart is the spirit, the spark, the vitality of our soul, Eleanor’s penchant for plotting like a military general, the analytical approach in her make-up not to mention her duty and service as Queen to her vast constituency as she moved the chess pieces of life around the board behind the scenes, cause me to wonder about a different Sun sign.  While not the best face forward of it, I think she possibly might have been a…..VIRGO or, a Leo sun with a Virgo ascendant.  Unfortunately, it’s unlikely we’ll ever know.

If you’re a fiction writer, think about using basic astrological characterizations when creating or enhancing your characters-real and imagined.  There are several good basic books on the market than can help.  Here are some of my favorites: 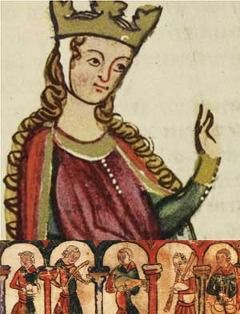