This post is a departure from what you might be expecting, as I’ve been I have been tagged by fellow English Historical Fiction author, Mark Patton, to take part in a “Main Characters” blog hop.  The concept of ‘blog hops’ between authors is to introduce aspects of our works to readers and of course to support our writing colleagues across the ethers. For this ‘hop’ the  idea is to introduce a protagonist from a published or anticipated to be published novel. I’m currently working on the third novel of my historical fiction series which takes place across 12th, 13th and 21st century lines, mainly in Great Britain…although the current work in progress is built upon the esoteric story of the Cathars, the Gnostic sect persecuted by the Inquisition in 13th c southern France.  If you’ve been following my blog, you’ll have seen earlier posts on this gentle group of Christians labeled as heretics by Rome who met a fiery end at Montsegur on March 16, 1244. 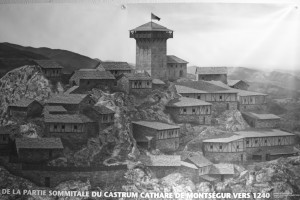 Possible layout of fortress at Montsegur 1244

Each of my books is grounded in actual historical places, people and events around which I then build fictional characters and story. The participating authors in the blog hop are asked to address seven questions about their chosen protagonist.  My second book which is featured in this ‘hop’  is written in ‘alternating narrative’ which means that similar to the works of Diana Gabaldron and MJ Rose, the main protagonist is subject to images and influences from a past life–this said I’m going to introduce both of my female protagonists to you!

1. What is the name of your character, and is he or she a fictional or a historical person?

In the 12th c portions of this book, Edana Morggon is the main protagonist who then re-appears as Dr. Dana Morgan in the 21st century.  Both women are completely fictional although, the characters they meet in both time frames are very much historical.

2. When and where is the story set?

The primary historical setting is Glastonbury Abbey in England’s west country, just before the Great Fire of 1184 as well as ruins that remain in the 21st century. For those who have never been to Glastonbury, it’s one of those places that abounds in extraordinarily deep history, legend and myth.  King Arthur, Joseph of Armithea, Edward I, Henry II and The Goddess, each figure heavily into Glastonbury’s magic.  However, in 1184 and 2010, my protagonists are faced with events that involve the fire(and its suspicious origins), political ambition, greed and psychological dysfunction… all having to do with mystical secrets believed to have been embedded within symbols placed in the floor of the abbey’s ‘Holy of Holies’. 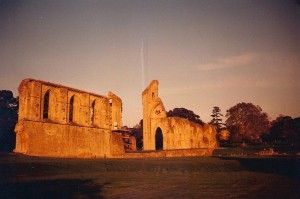 3. What should we know about the character?

12th c Lady Edana Morggon is a wealthy widow who accompanied her father and greedy, abusive husband to the Holy Land. Following the deaths of both men on crusade, Edana was imprisoned but surprisingly rescued by an unusual Sufi named Ghali.  Ghali for reasons only known to himself and Edana, enlists desert mystics to educate her in sacred arts and medicine before they both return to her estate in England.  Edana is a woman unusual for her time as she’s fierce in personality, smart, gifted and fairly self-sufficient…but she also harbors secrets.

21st c Dr. Dana Morgan is  a wealthy, University of Chicago historical archaeologist with expertise in ancient scripts, but who also possesses an inherited, although unacknowledged, gift of psychic sensitivities.  As the 21st c opens, her archaeologist husband of five years has suddenly died. Overtaken by grief, Dana retreats to the safe haven of her favorite aunt, Lady Fredi Morgan at her Oxfordshire estate.  When Dana is introduced to two historical archaeologists from Oxford University, she unwittingly becomes embroiled in 900 year old Glastonbury mysteries that have resurfaced and threaten her life.  Equally distressing, Dana comes face to face with  a past life through Edana Morggon. However predictably, as a scientist, she resists acknowledging such a possibility exists. 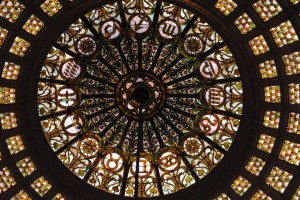 4. What is the main conflict? What messes up your character’s life?

Historically, Dana has categorized her feelings into intellectual exercises as a means of protection ever since the sudden death of her parents when she was fifteen. However, when she learns that her husband had a secret life which ended in suicide rather than murder, she struggles to come to terms with heart centered emotions she can’t control, her sense of failure in judgement and the recognition of her inherited psychic sensitivities.  As Glastonbury’s 12th century story resurfaces in 2010 through events that threaten her life, Dana is forced to deal with these unresolved aspects of herself.

5. What is the personal goal of your character?

Dana has to learn to accept who she really is as well as putting trust in relationships, especially with men.  In addition, with the help of Edana Morggon, she begins to recognize that the veil between worlds is thin and can transmute to reveal universal truths.

6. Is there a working title for this novel, and can we read more about it?

The book is entitled, ‘A Conspiracy of Ravens’.  You can read more about it under the ‘Historical Fiction’ link on my full website: https://gayemack.com or under the link for ‘clients’ on https://globallionmanagement.com

7. When can we expect the book to be published?

‘A Conspiracy of Ravens’ and its predecessor, ‘A Murder of Crows’ are currently represented by Peter Miller, CEO-Global Lion Intellectual Property Management, who is actively seeking a home for them.