The other day while working on a client’s natal chart and then later on my historical fiction book, A Flight of Doves, I realized something that hadn’t occurred to me before. Through the lens of Evolutionary Astrology, there’s a connection between positive interpretations of the twelfth house, Neptune and Pisces and the guiding philosophy of southern France’s 13th century heretical Cathars.  For the moment put this thought on the back burner.

In analyzing a natal chart, the Evolutionary Astrologer is bombarded by an over-kill of interpretative possibilities that’s staggering.   Planetary house placements, the signs they’re in at birth, positive and negative implications, mathematical relationships and importance to the over all picture including the relationship to past karma that’s come to fruition–these are all in the mix and must be considered.

In western astrology, the twelfth house has many interpretations.  Ancient astrologers called it the ‘house of troubles’ but today it has far wider application on the mundane, psychological and spiritual levels. As I have written before, Evolutionary Astrology focuses mainly on the psychological and spiritual arenas.  Every chart is unique and a lot rides on the various relationships.   BUT, among the possibilities(the operative word here being ‘possibilities’) with the 12th house, its ruling planet Neptune and ruling sign of Pisces, things can get very mystical and spiritual!

Houses in a chart are where the ‘action is’ and for the twelfth, one of its actions can signify ‘endings’.  Taken in psychological and especially spiritual contexts, we’re talking about things that need to go in order for spiritual awakenings or awareness to happen within us as part of our soul’s evolution.

Next we consider its ruling planet Neptune.  Neptune in it’s highest expression, is all about dissolution of the ego because it’s main job is to foster our connection to the Divine, whatever that means for an individual.  Neptune is often referred to as the archetype of the mystic–and why not?  Those who have a strong Neptune signature in their charts ARE prone to heightened imagination, psychic perceptions and mysticism.  Depending on everything else in the birth chart, this cloak comes in various styles!

Finally, we come to the sign of Pisces which rules the twelfth house and Neptune.  Compassion, experience of the mystical, self-transcendence and letting go of the world–these all come under the purview of Pisces.  So what does this have to do with the Cathar beliefs?

The Cathars believed in Dualism.  For them, the physical world and everything in it was a creation of Satan, including the body and for the ‘committed’, procreation.  Purity of spirit was gained through a direct connection to God or the Divine.  In their view, a belief system that supported a corrupt  hierarchy and homage to a Pope was the very embodiment of Satan.  Nevertheless, they were known for their universal compassion as healers, providers for the poor, sources of spiritual guidance, herbalists and yes, astrologers.

When the 220 men, women and children were burned to death for their beliefs by the church at the castle fortress of Montsegur in southern France on March 16, 1244, historical accounts report them singing their way into the flames.  Despite the horrifically gruesome circumstances, for these believers reality was that they were freed of earth’s heaviness and were returning to the light of God.  Twelfth house, Neptune and Pisces–their mystical pathway HOME.   Is it any wonder those who had taken vows wore a silver buckle fashioned in the sign of Pisces? 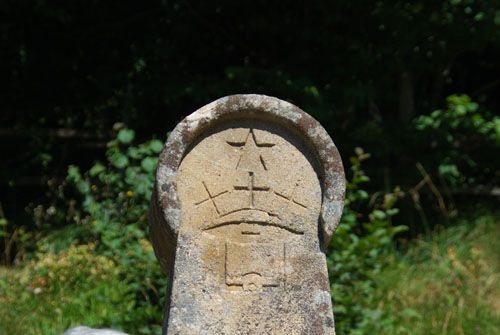